First of all: I’m a 20-year-old male driving a Smart, and yes: I’m perfectly fine with it. 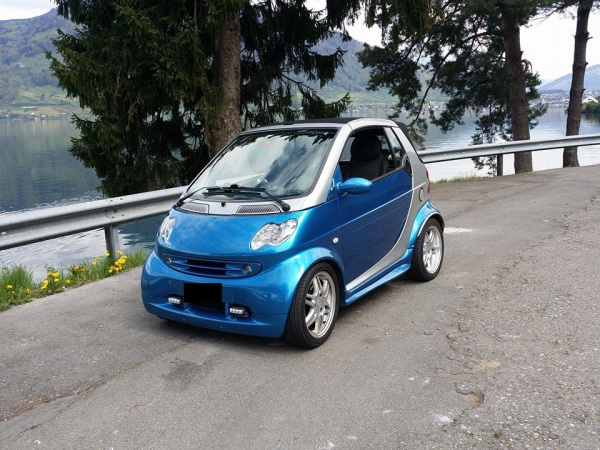 I’m driving the older version (technically: A450), so not everything may apply to your new Smart (later than 2007). I’m driving the convertible version, so that adds to the fun. There is a Brabus body kit on it, but that’s just for the looks, the engine is standard.

One of the first things that surprises people when they first sit in your Smart, is the space you have. It looks small from outside, but that’s because you have a full-sized car that is just cut behind the front seats. Speaking of normal cars, you can drive fast in a Smart. Remember, this is a city car, so it’s designed to accelerate fast, when the lights go green. People are often surprised how much power it’s got “down there”. You can even get it to 140 km/h until the electronic lock keeps you there. The engine would go up to about 160-170 km/h, but the car may get unstable at such speed. But please don’t do this on normal roads and stick to traffic laws. And no, I haven’t tried this, it’s just reports from users on the Internet.

Speaking of safety, the ride is pretty safe. If you want to learn more, search for the Tridion safety cell, Smart has installed. Basically, you sit in a stiff structured cell, with plastic on the outside. If you want to go this far, you can compare this to Formula 1 cars, but only to get an idea, of course it’s not that strong. In front of you is exactly nothing, but A/C, lights and other small stuff. Wonder where the engine is? It’s at the back, below the boot. If someone drives into your rear, it’s designed to go under this cell, so it won’t hit you in the back.

All Smarts are automatic, a thing that bothers some people (at least here in Europe). I have to say though, I like it especially in traffic. It’s really nice to just accelerate and brake, not letting the clutch slip for a couple moments every time a car has moved half a meter. Additionally, it’s got hill hold control, so it waits 0.7 seconds for you to hit the throttle. That seems really short, but it’s enough. If it would wait longer, it’d block your throttle.

If you want to stay a little longer at the same place, parking often becomes an issue. As you know, not so much with a Smart. You are searching with far more open eyes, when you’re looking for a parking space, and you consider places you haven’t even thought of before. I even managed to park it in a corner of a car park, with only one wheel partly out. Another time, some cars blocked me as I was parking. I only had about a meter before and behind me, but I managed to turn it by 90° in just 3 turns and then drive out safely. You can even park it across, since it’s as long as parking spaces are wide, but that’s illegal in some countries like here in Switzerland, where a car has to be parked in street direction.

I have to admit though, the ride is a bit noisy. That’s not surprising, remember, you’re sitting about a meter away from the engine. Additionally,  you can really feel when you’re passing a lorry, since the Smart has a big side for wind to attack.

In conclusion, it’s a car I really like. Of course, I wouldn’t use it when I’d drive for longer every day, but it works well on my everyday commuting and occasional trips. If you do a little body work, your Smart may even get more attention than just the fact that it’s a really small car.

Let’s go for another piece of Smart knowledge. One that Top Gear never does (and hopefully never will do, it’s great like that): actual consumer advice.

Your seat belt may twist out of nothing. You’re unsuspectingly entering your Smart, and the belt feels uncomfortable, or may not get back in its housing, if you let it go. I had this problem for about a month and was on the point of calling my mechanic to unscrew the holder at the bottom, untwist and then re-screw this. Fortunately, this was not needed:

The Smart uses a pretty neat module system to house accessories like the CD holder and the ashtray. If you look at the bottom of your center console, you can see a couple of grey, round plastic covers. They are covering small screws, because the thing is modular. You can get the ash tray out and install another CD holder, if you feel so.

The bottom screw though is reserved for the beverage holder, even though you can fit another module if you want to. I wanted a holder from the newer series (451) because it can hold cans too instead of only bottles. Once shipped, you can unscrew the old holder and then pull (you really have to pull it hard) away. It may need a lot of force, because it’s fixed with Velcro. The new one is a little easier to install, but there’s only a torx screw included. Use the old one, it works fine and you can use your screw cover again.

If you try to change into Reverse and your gear display just says “0”, it’s because you didn’t press the brake. In general, if you’re changing from Drive to Neutral or Reverse, press your brake.

Additionally, your Smart hasn’t got a special parking gear. Change to Reverse, but only with a running engine. This will engage gears, like you set a manual car to first when parking it. If you switch gears with your engine off, it won’t engage them, since the gear changer only does its work with a running engine.

When operating your roof, turn your engine on. Yes, it works without that, but the roof operating system needs more power than the battery delivers. Technically, you can operate the roof at any speed, there’s no speed limit employed. However, reports of users on the Internet show that this can greatly damage the operating system of your roof, especially when there’s wind, like when a truck drives past you.

You can drive on highways too, but be ready for the noise. I suggest to close the windows, because the wind vulnerability gets greater with roof + windows open.

If you’re parking your Smart, remember that it’s a lot shorter than a normal car. You can even park two in a row, if you want. However, 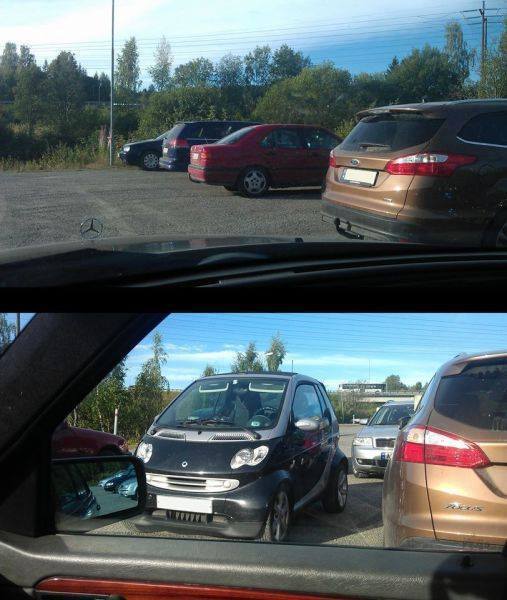 This is impossible to see and especially when you’re really searching for a parking space, like there’s no other around, you’ll start to hate Smart cars.

Oh dear… there aren’t many things that are bad in everyday driving, but let’s dwell on the gearbox. As I said, it’s  a sequential automatic gearbox (with flappy pedals or stick to drive semi-automatic). However, it’s not the automatic part of the gearbox that is bad, it’s the shifting; so this refers to semi-automatic too.

Oh dear, what am I again? A vacuum cleaner? No. A lawnmower? Hmm… no, not enough blades. I got it, I’m a freezer!… no, that doesn’t work out. Oooooh, I’m a gearbox and I’m supposed to change a gear. How cool is that!

As Jeremy Clarkson points out on the Roadster, it’s like those old digital cameras that you take a picture with, but it responds just as your subject moves away.

You have to think a little more ahead, if you want to catch that small gap when you’re waiting at a junction. And you can’t do anything that requires shifting more than two gears up or down in speed, because by then everyone’s overtaken you. You have to get used to it, more than on other cars.