First of all: if you want a really silent fan for your desk or bedroom, look no further. 2017 Update: it’s still the same

I needed a fan for exactly these two purposes. It needed to cool me when working at the computer, and it needed to cool me when lying in bed. As lying in bed often means sleeping it should be silent too. Especially since I get easily distracted or even disturbed by sound when working (I’ve got problems with external HDDs  too, even had to send one back just for the noise). 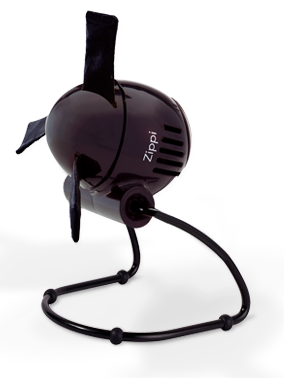 As you can see on the picture, it’s got no protective grid. But this doesn’t mean it’s chopping off your hands and fingers, since the rotors aren’t made of hard plastic. They are flexible, fabric-like nylon rotors. That means they won’t hurt you really.

These nylon rotors help to create almost no sound other than air circulation. This doesn’t mean it’s completely silent, but as silent as it can get. On the first of two speeds, you will often forget that it’s running (from the sound) and I’m not joking. On the second speed it’s a little louder, but even then it’s only an accelerated air flow. No engine sound whatsoever. I am no sound engineer, so I can’t give you a good comparison but it sounds smoother. It’s white noise, not air pressed through little holes, causing turbulence mixed with rotation of an electric engine. It’s noise that your brain can filter out.

The two speeds are fine too. Speed 1 is enough for working and sleeping, Speed 2 is for cooling down fast. Speed 2 is louder, but you’ll hear just more air, not a louder engine.

It is not a fan for a whole room, so you might need two if your bed is occupied by two. Additionally, it does not rotate. It’s a personal fan :)
But since they aren’t that expensive and you might fall in love with it easily, that’s no problem.

The only downside I see is that you have to control it from behind, so that means reaching around it. Or at least trying to. But you’ll get the feel of it quickly and it doesn’t really hurt if you don’t.

PS: this product is available in Switzerland too!