A year and a half ago, I got rid of my old gaming rig from 2010. I didn’t use it that much anymore and it had some stability issues. I played mostly on my PS4 but now I was thinking of getting back in the game.

Note that I know that several of these components are not the newest ones, the CPU and the GPU are now about a year old. I know there are new generations of both coming out in a short time, but I didn’t want to wait another half-year before they’re released and available. My view is that the CPU should be enough for the next time and I’ll wait for the later generations of Pascal on the GPU part. 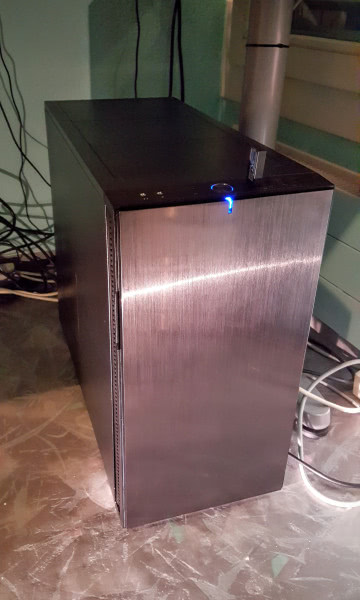 This PC should be able to play current-gen PC games on my 2560x1440 monitors. 4K is an option in the future and shouldn’t be a problem. The goal here is to have a playable 60 fps, but I’m not dying if I only get 59.

I also want the PC to be quite silent and even unhearable on idle, including normal web browsing. I’m a bit sensitive on noise and I can’t work properly with a loud fan.

Another goal is understatement. I don’t want an Acer Predator case that looks like it came right from a Transformer movie. I want something that doesn’t show what its capable of until you get to see the inner running. That’s why I don’t want a windowed PC and not too much LEDs everywhere. It’s in my sleeping room and I probably want it to run at night sometimes.

So I’ll go through all the components I used for this build and explain why I chose them.

I always like to start with the outer shell and see what I can build on. It’s like the foundation of your house. So I settled for the Fractal Design Define R5. This is in tune with my goals and is a great starting point. It’s sound-isolated, has enough space to work in it (it’s full ATX) and does nice with cable management.

They feature enough space for every fan you might install and the dust filters are easily maintainable.

Another thing that sets the limit for your build, so decide on that early on. I went with the Seasonic Platinum 860W. It’s fully modular and features a Hybrid mode. This means that the PSU will turn off its fan when not under load, but you can turn that off if you don’t trust that feature.

Some people pointed out I should probably go with something more durable, like beQuiet. Jokes on you, Seasonic is the actual OEM of beQuiet :) Here’s a quick roundup of who’s who.

So now we’re getting onto something. The motherboard sets the limit for all the actual electronics, so another thing of basement building.

I went with the Asus Z170-Deluxe one. I like Asus, so that’s a given and the Z170 is Intel’s current chipset for enthusiasts. The Deluxe is the top of the line, excluding ROG products which I don’t need the features of, or the workstation series which I don’t need too.

It features an LGA1151 socket for current Intel CPUs, 4 DDR4 slots for up to 64GB of RAM, enough PCIe slots for your needs, an insane amount of SATA connectors and other nice stuff which I won’t go into too much detail here. One reviewer described as they fitted the features of an E-ATX board on a normal ATX one.

One thing I do like to point out is the buttons on the board which you’ll like when building it. There’s a POST code display (and the codes are printed in the manual), four diagnose LEDs and a Power On and Reset button. The POST code display shows you what POST phase your PC is which is a nice thing to know if it halts. The buttons are very handy because you don’t have to fiddle with those case connectors early on.

So now that we’ve chosen our foundation, let’s put stuff on it. The CPU is the next step because it determines your general performance. I went with the Intel i7-6700k. I thought of trying the non-K version, but the price difference was not that big and I thought, why the heck not leave the option for overclocking?

I also thought of getting the i5-6600k but again, price difference was not that much and it just doesn’t sound as cool, and the hyperthreading should come in handy. I can go with the top-of-the notch, so just do that.

Note that I didn’t try AMD simply because I have no experience with AMD and I want to use my knowledge already gathered.

So all this power should then be cooled down a bit. Being a fan (ha-ha) of tried-and-tested stuff, I chose the Noctua NH-U12s. Criteria were simple: backplate-mounted (I guess anything but box?), silent and not that big if possible. My height clearance is 18cm in that case, but I didn’t wanna have it hanging over my RAM in case anything goes bad.

The package has got everything you need in it, including thermal paste and mounting kits. Plus Noctua is known for their great customer service, so if anything is missing they’ll send it to you. They’re Austrian-based, so that shouldn’t be a problem for me. A very simple thing but I really liked that: the included thermal paste is not just “some crap we got lying around” but is actually something they sell separately. They even tell you the exact model so you can figure out beforehand if you need anything else.

This isn’t a problem anymore today with current RAM sizes so you’ll never run into any problems under normal operation. I first thought of going with 4x4GB, coming out at 16GB. A friend then pointed out that I was leaving no room for future upgrades without throwing away something. So I thought, what the heck, I’ll just go with 4x8GB. Did that, price difference was again not that much (just 40% as opposed to the logical 100%). I went with the HyperX Fury DDR4 2400MHz one. I didn’t wanna use the full 2400Mhz, but they were in stock as opposed to the normal 2133Mhz.

One thing I like about them building-wise is that they do feature a cooler on top of it, but it’s not ginormous and would still fit many CPU coolers.

This is the other performance part. I like Asus and Nvidia so I went with their current top-notch model, the GTX 980 Ti STRIX DC3OC. Note that this one is overclocked coming from the factory and is in itself faster than the normal 980, being the Ti model.

As with the CPU I can’t tell you much about its features because there ain’t anything you don’t already know.

One thing you should note here is that the GPU can give you clearance issues in your case. In my case, even with the HDD cages installed, the clearance is 31cm, the Asus GPU is 30.5cm long. So good with that!

I think that an SSD is pretty-much standard nowadays and I will fit any SSD before I’d even think about getting and HDD.

Just for the fun of it and because it’s much smaller, I went for an M.2. I didn’t make use of the PCIe speed ones, I just didn’t wanna clutter up my case with another cable going in a completely other direction than the other storage cables.

I chose the Samsung 850 Evo 250 Basic M.2. It’s got the same speed as the normal Evo Basic and was even a tad cheaper than that full-size SATA one. Other than that, make sure your M.2 does not block any ports software-wise, because some motherboards make you choose between an M.2 and other ports. I had to choose between using an M.2 or more than one SATA Express port. Make sure that is not an issue!

This is the only internal thing that was taken over from the old build. Since I have my Synology NAS for long-term storage, I don’t need that much space but I got it lying around and it’s only meant for games anyway. It consists of my old setup of 1x1TB Samsung disk and 2x2TB WD REDs. I honestly have no idea why I went with the RED ones since I don’t intend to use it as a NAS, my only guess is that price difference was, again, not that much.

So yes, it’s 2016 and I’m still including an optical drive. This is meant for games that I buy on CDs or maybe a Blu-ray I wanna burn. It’s not that expensive and I know that I will need it at some place in time.

I chose the Asus BW-16D1HT, a Blu-Ray and DVD reader and burner. It’s kind of everything you can currently have at consumer-grade.

When you’re putting together your shopping list for your computer, go for the better, more expensive part when in doubt. Don’t downsize too early! Just try to fit all your stuff first, then check against your budget and downsize accordingly.

Check prices on other sites but don’t use a bazillion vendors. I used two vendors I usually buy stuff from. I took most things from the cheaper one and then got things from the other one when they didn’t sell that or its out of stock. I recommend keeping this down to two vendors since I wanted to get the components myself instead of having it sent by mail and it makes any RMA process much easier when step 1 isn’t “figure out where the hell I got that from”.