Hello darkness, my old friend
I’ve come to talk with you again
Because a vision softly creeping
Left its seeds while I was sleeping
And the vision that was planted in my brain
Still remains
Within the sound of silence

I think almost everyone knows these lyrics, at least the start of it. Now according to Spotify these are the most heard lines of Disturbed. Let that sink in for a moment. The heavy metal band’s most heard song is a cover of The Sound of Silence by Simon and Garfunkel. 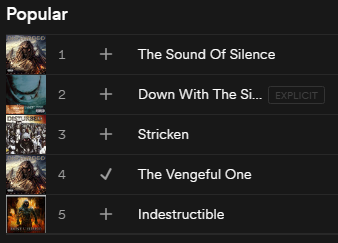 Now that goes to show that a band’s most popular song is not necessarily a band’s best song. I don’t know if that’s already naïve to think, but it’s just another great example.

Another example of this is Metallica’s Nothing Else Matters. While they’re a heavy metal band too their most popular song is a ballad.